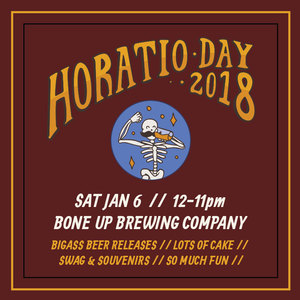 Horatio's the name of our dapper logo dude, and he's so dang special to us we're gonna throw him a kickass birthday bash! The holidays will be over, but we don't let the dark days of winter get us down - join us for some cozy cheer in the taproom on Sat. 1/6 for a day of kickass beer releases, free cake, special swag, and the beginning of a dumb new tradition or two!

Questions you probably have (we'd honestly be a little worried if you didn't have questions about this):

Why is Horatio's birthday January 6?
Because that's when he was born! Or rather, that's the origin date of the original bar napkin sketch that originally became* Horatio! He was born in The Crypt Pub in Savannah, GA as the result of some now-forgotten conversation between Jared and his cousin Brian.

What beers are you releasing?
We've got an awesome draft list full of big beers planned, including the first and only release of the Quadless Leg Monster: a quad aged in apple brandy barrels! We'll also be pouring Joybringer Tripel, El Pulpo Chocolate Orange Imperial Stout, Life Sentence DIPA, and Shelby, a smoked stout, alongside plenty of hoppy and sessionable offerings.

Free cake?! Go on...
I mean, it'd be a pretty sad birthday party without cake! We're scheming on the first of hopefully many needlessly elaborate cakes for the years to come. So come eat some!

Special swag?! Go on...
We've got some Fancy Glassware on the way for all these big fancy beers, plus some other treats and souvenirs for you to enjoy!

Dumb traditions? I like dumb traditions! What kind of dumb traditions do you want to start?
We'll keep that one a mystery** for now, but you can rest assured that some jerk*** will almost definitely try to start something that involves stupid hats.

Do I need to pay to get into this thing?
Hell naw! As always, our events are free to enjoy, and first come first serve. Just pay for beer/food as you go

* Though since he didn't really become Horatio until much later, you could make the case that this was more like his conception than his birth, but that's a weird thing to celebrate.
** We have no frickin' clue.
*** Definitely Jared.

Located in the heart of Everett's budding Fermentation District, the taproom is open Wednesday through Sunday and features full pours, flights, and growlers from ten rotating tap lines. In addition to a weekly cask, the taproom hosts games and an ongoing series of food trucks and pop ups. Outside of the occasional tasting, the best place to find Bone Up is right at the source!