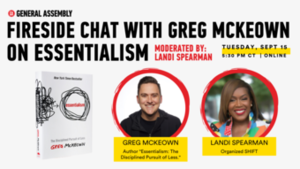 Join us for a fireside chat with Greg McKeown, the Author of "Essentialism: The Disciplined Pursuit of Less."

Originally from London, England, Greg McKeown is the author of the New York Times bestseller, “Essentialism: The Disciplined Pursuit of Less” and the founder of McKeown, Inc, a company with a mission to teach Essentialism to millions of people around the world. Their clients include Adobe, Apple, Airbnb, Cisco, Google, Facebook, Pixar, Salesforce.com, Symantec, Twitter, VMware and Yahoo!.

McKeown is an accomplished public speaker and has spoken to hundreds of audiences around the world including in Australia, Bulgaria, Canada, China, England, Holland, India, Ireland, Italy, Japan, Norway, Singapore, South Africa and the United States.

Highlights include speaking at SXSW, interviewing Al Gore at the Annual Conference of the World Economic Forum in Davos Switzerland and receiving a personal invitation from Haakon, Crown Prince of Norway, to speak to his Annual Innovation Conference.

His writing has appeared or been covered by Fast Company, Fortune, HuffPost, Politico, and Inc. Magazine and Harvard Business Review. He has also been interviewed on numerous television and radio shows including NPR and NBC.

In 2012 he was named a Young Global Leader by the World Economic Forum. Originally from London, England, McKeown now lives in the Los Angeles area with his wife and their four children. He graduated with an MBA from Stanford University.