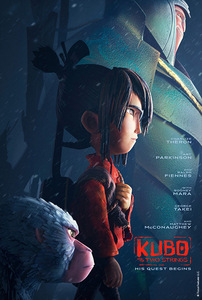 FEATURE FILM - Included with Museum Admission
Kubo and the Two Strings
2pm - 3:45pm
Morse Auditorium at the Peabody Essex Museum
Reservations online at or at Admissions Desk
A young Japanese boy embarks on a journey to learn the truth about his family. Along the way, he battles evil with the help of his magical shamisen, a traditional stringed instrument. Stick around after the film for featurettes that go behind the scenes into the making of this stunning stop-motion animated film. 2016, Rated PG.

Presented as part of The Big Draw 2017: Living Lines
Monday, October 9, 2017 from 10:00 am to 4:00 pm
Since 2000, more than 4 million people in 25 countries have taken part in this international celebration of drawing. From flip books to the big screen and everything in between, this year's animation-themed festival aims to unite pixels, pencils and people from across the globe to celebrate the universal language of drawing.
#BigDrawPEM