Film Screening & Discussion — UNITED IN ANGER: A HISTORY OF ACT UP 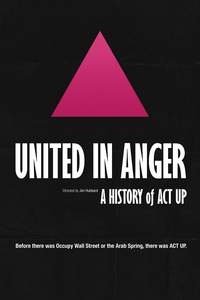 Join the Eastern Massachusetts Chapter of Pride at Work, along with members from the Rhode Island Chapter, for an online film screening and discussion of UNITED IN ANGER: A HISTORY OF ACT UP, an inspiring true story by director Jim Hubbard about the birth and life of the AIDS activist movement from the perspective of the people fighting the epidemic. Using oral histories of ACT UP members, as well as rare archival footage, the documentary depicts the battles of ACT UP members and allies against corporate greed, social indifference, and government neglect.

UNITED IN ANGER is a feature-length documentary about ACT UP (the AIDS Coalition to Unleash Power) and their supporters. Told from a grassroots perspective, viewers will learn how a small group of people from all national origins, genders, and classes struggled together to change the world and save each other’s lives.

Highlights from the film include the planning and execution of a half dozen exhilarating major events, such as Seize Control of the FDA, Stop the Church, and Day of Desperation, with a timeline of many of the other direct actions that forced the U.S. government, the privatized healthcare system, and the corporate media to deal with the AIDS crisis. People who experience the film will also gain critical insights into how ACT UP’s complex culture of civil disobedience, profound grief, sexiness, and incredible energy affected their meetings, empowered their demonstrations, and influenced affinity groups.

A facilitated discussion with all attendees who wish to share their reflections on the film, ACT UP, or LGBTQ+ activism in general will follow the screening. This event will happen via Zoom meeting. Registration is required. To register, visit the following link: https://tinyurl.com/PaWEMACTUP. We look forward to seeing you there!