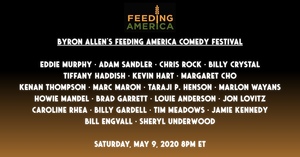 UPDATE: Co-produced by Entertainment Studios and Funny Or Die, the “Feeding America Comedy Festival” will air Sunday, May 10 from 7-9 p.m. ET on NBC.

Byron Allen’s production studio will host the Feeding America Comedy Festival on Saturday, May 9th to raise money for America’s hunger-relief organization, Feed America, in response to the coronavirus pandemic. Allen is pulling out some of Hollywood’s big guns to headline the event.

There are more comedy icons expected to sign on in the near future.

Co-produced by the Funny Or Die entertainment brand, Feeding America will stream the comedy festival on the Allen Media Group-owned television networks, Comedy.TV and The Weather Channel, as well as on the free streaming service app Local Now from 8:00 pm to 11:00 pm (ET) on Saturday, May 9, 2020.

“In partnership with Feeding America, my comedian friends and all of us at Allen Media Group are pleased to announce this global live-streaming comedy event on May 9th,” Allen said in a press release. “Laughter is often the best medicine, and we are extremely motivated to bring attention to issues of food insecurity, and to assist in providing meals to families across the country who are financially impacted by the COVID-19 pandemic.”

“The coronavirus pandemic and the economic downturn it has created is shining a light on the fragile nature of people’s household budgets,” added Claire Babineaux-Fontenot, CEO of Feeding America, a nationwide network of 200 food banks. “Millions more of our neighbors are turning to food banks for help and we cannot thank Byron Allen and Allen Media Group enough for their support to raise funds and awareness of our work.”