Fashioning Our Future: An Evening with Elaine Welteroth 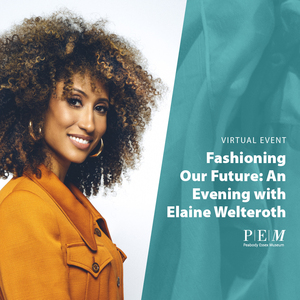 In conjunction with the museum's Education and Civic Engagement department and Fashion and Textile collection, Petra Slinkard, Director of Curatorial Affairs and The Nancy B. Putnam Curator of Fashion and Textiles, will recognize and celebrate the legacy of Elaine Welteroth. Welteroth's contributions to the fashion industry have illuminated issues of representation, creativity, consumption, transculturation and distinctiveness that have and continue to impact the industry. Welteroth is an example of how we can advance equity and inclusion in the field through her innovation, determination, creative expression, protest, and entrepreneurial spirit.

This free virtual event will take place on Zoom; a reliable internet connection is required. Instructions for joining the event will be included in your confirmation email.

ABOUT THE SPEAKER
Elaine Welteroth is a judge on Project Runway, New York Times bestselling author, award-winning journalist, and former Editor-in-Chief of Teen Vogue. She is known for her groundbreaking work at the helm of Teen Vogue, where in 2016 she was appointed the youngest ever Editor-in-Chief at a Conde Nast publication and used her position to prioritize diversity and social justice coverage. She’s now a leading expert and advocate for the next generation of changemakers.

In 2020, Elaine was recently appointed Cultural Ambassador for Michelle Obama's When We All Vote initiative and in the wake of George Floyd’s death, she helped launch the 15 Percent Pledge, a nonprofit advocacy organization that recruits major retailers including Sephora and Macy’s to commit at least 15 percent of their purchasing power to Black-owned businesses. She is the host of a new podcast called Built to Last that amplifies the stories of Black founders, past and present. Her debut book More Than Enough: Claiming Space for Who You Are No Matter What They Say was an immediate New York Times bestseller and won the 2020 NAACP Image Award for Outstanding Literary Work. Her work appears in The New York Times, British Vogue, Glamour and The Hollywood Reporter. She has also written for the hit show Grown-ish and has appeared on-camera for a range of media outlets, including ABC News and The View. She lives with her husband in Los Angeles.

Reddit
30/09/2021 19:00:00 30/09/2021 20:00:00 America/New_York Fashioning Our Future: An Evening with Elaine Welteroth In conjunction with the museum's Education and Civic Engagement department and Fashion and Textile collection, Petra Slinkard, Director of Curatorial Affairs and The Nancy B. Putnam Curator of Fash... Online, Boston, MA 02110 false DD/MM/YYYY