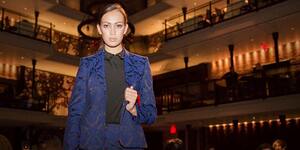 On Thursdays, the hotel becomes a who’s who of Boston’s fashion elite as the hotel’s expansive lobby turns into an interactive fashion show, featuring live music from DJ Frank White. From 9pm – 12am, models strut through the lobby’s Catwalk and lobby, pose on tables, ride the escalators, and weave through the crowd as attendees evaluate everything from Ted Baker’s new line to an up-and-coming Boston designer’s work. The event has solidified The Liberty as Boston’s fashion hotel.