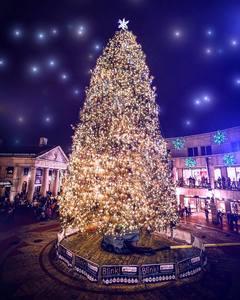 The Official Blink! Tree Lighting takes place on December 3 during a live broadcast on WBZ-TV/CBSBoston at 7:30 p.m. Hosted by WBZ-TV/CBS Boston news anchors Lisa Hughes and David Wade, the television show will feature holiday entertainment from 17-year-old Amanda Mena of Lynn, Mass., runner-up in the 13th season in 2018 of the nationally televised show America’s Got Talent, the Wellesley Community Choir, a special visit from Santa and the kick-off of the New England Patriot’s Holiday Toy Drive.

Amanda Mena of America's Got Talent will perform at the 2019 Tree Lighting at Faneuil Hall.Rising vocal star Amanda Mena is a seventeen-year-old Junior and honors student at St. Mary’s High School in Lynn, MA. Amanda’s vocal talents were showcased internationally in 2018 on Season 13 of NBC’s America’s Got Talent where she received the Golden Buzzer for her soulful rendition of Aretha Franklin’s “A Natural Woman”, wowing Simon Cowell and the judges all the way to the quarter finals. So, impressed with Amanda’s performance, they arranged for her to sing on Broadway’s hit show “The Carol King Musical” in New York. Shortly thereafter, she was invited by leading Hollywood Producer Kenny Ortega to sing at the star studded 33rd Annual Imagen Foundation Awards, the “Latin Academy Awards” in Hollywood. Her tribute to the late Aretha Franklin had Hollywood’s elite on their feet dancing.

Fun facts about the tree:

- The Faneuil Hall holiday tree is 80 feet tall without the star – 83 feet tall with the star.
- It is the largest holiday tree in New England, and is likely to be taller than Rockefeller Center’s tree (which is normally about 75 feet tall).
- The 85-year-old, 12-ton Norwegian Spruce comes from Long Island, New York.
- It is scheduled to arrive on November 7th and begins installation on November 8th.
- It takes 10 people to raise the tree, followed by 12 days to set up and decorate with 30,000 lights and 1,000 strobes.