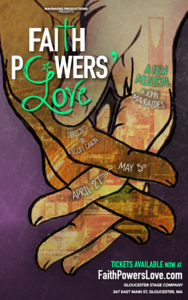 Faith Powers’ Love: A New Musical takes us to Saudi Arabia where Faith, the teenage daughter of a US politician and Ahmed, a local boy, forge an impenetrable romantic connection in spite of the skepticism swirling around them. Unrelenting bigotry and hatred challenge Faith’s relationship with her family as she and Ahmed navigate an increasingly divisive world. A fresh rock/jazz score composed by Ipswich native John Mavraides discusses religious and cultural identity through a timely and heartbreaking story. Brought to life by a dynamic cast of three, Faith Powers’ Love is bound to leave a life-affirming impression on audiences as the country’s social conversation continues to shift.

In its first-ever full-scale workshop production, Faith Powers’ Love: A New Musical runs from April 27th-May 5th, with performances on Fridays and Saturdays at 7:00PM and Sundays at 2:00PM. All performances take place at Gloucester Stage Company, 267 East Main Street, Gloucester, MA, 01930. General Admission is $15; Student Admission will be free during the opening weekend performances on April 27thand 28th with the presentation of a valid student ID. Tickets are on sale now at www.faithpowerslove.comor (978) 281-4433. Following the May 4th performance, director Scott Caron will moderate a talkback with Mavraides and the cast in conjunction with the Boch Center and Highland Street Foundation’s ArtWeek. The event will primarily serve as open forum for audience feedback in support of the piece’s ongoing evolution and improvement, as well as space to engage in the play’s larger themes as they relate to the modern world. All inquiries can be directed to faithpowerslovemusical@gmail.com. Produced by John Mavraides.