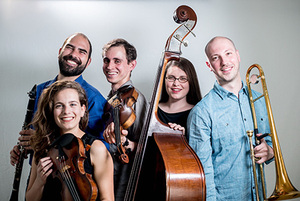 Internationally-recognized klezmer ensemble Ezekiel’s Wheels brings passion, virtuosity, and contagious energy to every performance. The Wheels improvise with the intimacy of chamber music and the intensity of a rowdy dance band.
Featuring original music and re-imaginings of traditional klezmer repertoire in both Yiddish and English, The Thread is the third studio album from the Wheels, following 2016's Turning Point and 2013's Transported.

Two Shekel Swing is a Boston-based ensemble blurring the lines between Klezmer, the folk music of Eastern European Jews, and Gypsy Jazz, the Parisian swing music of the 1930s. The result is a transcendent musical experience whose rhythmic drive and soulful character are universally easy to love. Their unique blend of Yiddish Swing and old-world nostalgia will have you clapping, stomping and singing along to these historic melodies and new compositions, interpreted with nuance, spirit and flair.