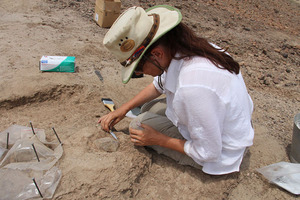 Human evolutionary scholars have long assumed that the earliest stone tools were made by members of the genus Homo, 2.4–2.3 million years ago, and that this technological development was directly linked to climate change and the spread of savannah grasslands. In the last decade, fieldwork in West Turkana, Kenya, has revealed evidence of much earlier technological behavior. Sonia Harmand will discuss the discovery of stone tools in a 3.3-million-year-old archaeological site in Kenya known as Lomekwi 3. She will show how this discovery is reshaping our understanding of the emergence of human-like manipulative capabilities, as well as the development of cognition in early hominins—the group consisting of modern humans and all our immediate ancestors.