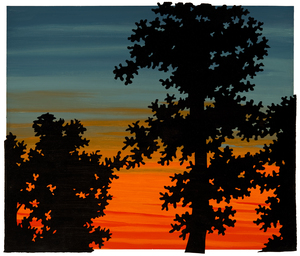 Alston Conley’s recent work builds on the landscape tradition established centuries ago in Belgium and the Netherlands, attesting to an enduring desire by artists to “mirror nature” wherever it may be.

“I live under a New England sky. The light, its color, intensity, sensation, season, and length of day influence my psyche, mood, interior life, and art practice. The long hours of daylight during summer and short hours during winter define our seasons, influence our lives, and distance us from our southern neighbors. The low sun, color-rich light, and long shadows of early morning or end of the day often silhouette the horizon or individual trees in shadow, while the light fills the sky.”

Conley uses both paint and collage to create his skyscapes. For his collages, he cuts paper forms with a razor knife, creating almost sculptural shapes that he silhouettes against a painted sky. Like the French artist Henri Matisse (1869–1954), he carves into color; flattened trees overlap his radiant backgrounds, primarily landscapes of Maine and Massachusetts where he resides.

Alston (Stoney) Conley is Professor of the Practice of Art at Boston College and was formerly also a curator at the McMullen Museum. He has received numerous awards, including grants from the National Endowment for the Arts, Fulbright-Hayes Program, Fine Arts Work Center, Massachusetts Cultural Council, and Ballinglen Arts Foundation. His works are held in several museums as well as corporate and private collections.

Reddit
10/09/2017 12:00:00 10/12/2017 17:00:00 America/New_York Exhibition: "New England Sky: Alston Conley" Alston Conley’s recent work builds on the landscape tradition established centuries ago in Belgium and the Netherlands, attesting to an enduring desire by artists to “mirror nature” wherever it may... McMullen Museum of Art, Boston, Massachusetts 02135 false DD/MM/YYYY