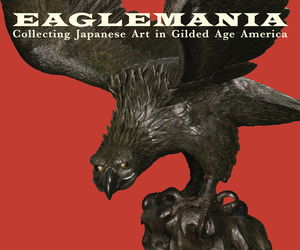 "Eaglemania: Collecting Japanese Art in Gilded Age America" celebrates and contextualizes Boston College’s monumental bronze eagle, a replica of which now appears atop a column on the University’s Linden Lane. Revealed during its recent conservation to be a Japanese masterpiece from the Meiji period (1868–1912), the original eagle was donated to Boston College in the 1950s by the estate of diplomat and collector Larz Anderson (1866–1937) and his wife, Isabel (1876–1948). Conservation has drawn attention to the eagle’s significant fine detail, careful modeling of form, and excellence of material construction, inspiring scholars’ desire to understand its origins.

In the exhibition, bronze, silver, and ivory sculptures of birds of prey, folding screens, scroll paintings, netsuke, lacquerware, ceramics, and textiles join to bring the history of the stunning Boston College eagle to life. Subjects explored include: the cultural and thematic roots for images of hawks and eagles in the Edo period (1615–1868); Japanese commoner appropriation and adaptation of raptor imagery in prints, netsuke, and folding screens; the practice of the elite samurai sport of hawking; the Andersons as American collectors of Meiji-era art; international world’s fairs as venues for foreigners to buy Japanese art and Japanese artists’ adaptation to that market; and the role of the monumental eagles, executed at the highest level of Japanese artistry, as a dialogue on nationhood between Japan and America.