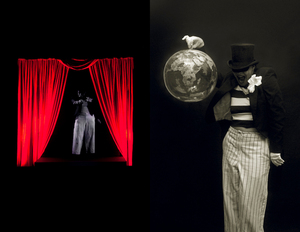 "Carrie Mae Weems: Strategies of Engagement" examines this eminent American artist’s diverse and innovative career through both celebrated and rarely exhibited projects made during the last thirty years. The exhibition focuses on the relational aspect of Weems’s art, recreating original installations in which viewers wander among suspended images on translucent fabric, enveloped by the artist’s audio narration, or stand confronted with video and photographic works that expose systems of power and injustice. The resulting immersion in moments of global and historical struggle prepares viewers for a more engaged discussion of American history through such difficult issues as violence, survival, and the need for radical social change. Entering that territory with Weems, visitors have an experience that is intellectually and ethically challenging, sometimes imbued with melancholy seriousness, sometimes with playful or ominous wit, and occasionally with unexpected moments of hope and grace.

"Strategies of Engagement" interrogates artwork growing out of Weems’s critical explorations of history; a focus that is powerfully relevant in the context of current activism around racial equality and social justice. In addition to several of Weems’s most acclaimed series, including "From Here I Saw What Happened and I Cried," the exhibition features the extraordinary "Lincoln, Lonnie, and Me," a theatrical video installation that incorporates the nineteenth-century “Pepper’s Ghost” effect, and the recently created "All the Boys," "Usual Suspects," and "People of a Darker Hue" dealing with police violence.

Carrie Mae Weems has spent over three decades honing her craft, producing a unique body of work that is aesthetically and politically powerful. Particularly in her engagement with African American history she has developed a complex series of strategies, moving beyond a witnessing of the past to more active interventions: appropriating and transforming verbal and visual archives; negotiating with the persistent effects of stereotyping; and animating history in the present as a constructed performance. Weems’s relationship to her viewers is at once pedagogical, confrontational, and collaborative as she engages them in ongoing debates about power and resistance, history and identity, and racial, gender, and class discrimination. In "Strategies of Engagement," Weems invites visitors to participate in numerous ways: through physical, emotional, and intellectual engagement with the works, through education and activism, and, perhaps most uniquely, through bodily engagement with history and the bodies of others, a practice she models in photographs and video.
The exhibition will be accompanied by a catalogue with scholarly essays from the diverse perspectives of art history, literature, race and gender studies, education, sociology, and history.