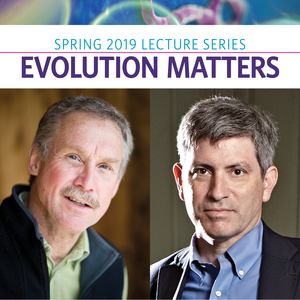 David Quammen, Author and Journalist
Carl Zimmer, Author and New York Times Columnist
Celebrating the tenth anniversary of the Evolution Matters Lecture Series, two of the world’s best-known science writers will engage in a lively and wide-ranging conversation. From a discussion of their latest books on heredity and the history of life on Earth to the story of how two English majors became award-winning practitioners of scientific non-fiction, they will explore the most important idea in biology—evolution.

David Quammen is the author of sixteen books including The Song of the Dodo (1996), The Reluctant Mr. Darwin (2007), Spillover (2012), and Yellowstone: A Journey through America’s Wild Heart (2016). His latest book, The Tangled Tree (2018), describes a radical new view of life’s history on Earth, arisen in recent decades within a field called molecular phylogenetics, partly from the work and influence of a scientist named Carl R. Woese. Quammen has written for Harper’s, The Atlantic, The New York Review of Books, Rolling Stone, Outside, and Powder, among other magazines, and is a contributing writer for National Geographic, in which his work has appeared regularly for almost twenty years. He is a three-time winner of the National Magazine Award, and has received several awards for his books.
http://www.davidquammen.com/

Carl Zimmer is the author of thirteen books about science and a science columnist for the New York Times. Zimmer’s writing has earned a number of awards, including the 2016 Stephen Jay Gould Prize, awarded by the Society for the Study of Evolution, to recognize individuals whose sustained efforts have advanced public understanding of evolutionary science. His newest book, She Has Her Mother’s Laugh: The Power, Perversions, and Potential of Heredity (2018), was named a Notable Book of 2018 by the New York Times Book Review. It was also selected for Publisher’s Weekly Best Ten Books of 2018. The Guardian named it a best science book of 2018. A professor adjunct at Yale University, Zimmer is a familiar voice on programs such as Radiolab.
https://carlzimmer.com/
https://www.nytimes.com/column/matter