Everything: Presented by Valerie Green/Dance Entropy 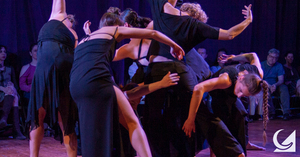 Everything is a dance performance installation evoking the ever-expanding universe, transforming the performance space into a constellation of stars and human bodies in various states of formation and explosion. Conceived and directed by Valerie Green and inspired by astrophotography, string theory, interconnectivity, and meditations on space and time, the new dance work weaves together a visual, physical, and emotional translation of the cosmos.

What began as a cultural exchange and collaboration between Valerie Green/Dance Entropy and Zawirowania Dance Theatre spanning New York City and Warsaw in 2019 has since expanded into a transportable, movable collaborative concept that is process focused. Intended to travel for collaboration, it replicates the long distance and cross-cultural exchange process, culminating in a different performative result each time. With an emphasis on collaboration, the work also utilizes local musicians and dancers.

Valerie Green/Dance Entropy is pleased to collaborate with local artists, Urbanity Dance and Nate Tucker for this rendition at the Museum of Science, Boston.

“Everything evokes many kinds of dynamics and interactions from physics in a clever way; the ideas are integrated in the choreography such that the piece is interesting as dance on its own. As a physicist it continuously inspired thoughts about physics and about dance as well.” — Walter Polkosnik, PhD Physics

VALERIE GREEN/DANCE ENTROPY
Founded in 1998, Valerie Green/Dance Entropy believes in humanizing movement, both in Ms. Green’s critically acclaimed choreographic work and the company’s mission to plant creative seeds in communities across the world. Intersecting mortal and transcendent, sensual and sophisticated, visceral and self-aware, VG/DE invites the artist, the audience—the human—into a compelling, physical experience. Based out of its home studio, Green Space in Queens, New York, VG/DE combines performance and specialized outreach programs to inspire communities in cultural institutions throughout the world.

Valerie Green has been an active dancer, choreographer, and teacher in the New York City dance community since 1995. After graduating from the University of Wisconsin-Madison and studying as one of the Erick Hawkins School’s last pupils, Green sought a platform for her own innovative movement style and artistic vision. She founded Valerie Green/Dance Entropy in 1998.

Urbanity Dance is a nonprofit arts organization that exists to inspire, engage, and empower individuals and communities through the art of dance and movement. Founded by Betsi Graves in 2008, Urbanity’s mission and objectives are fulfilled by its organizational pillars of Company, School, and Community.

Urbanity Dance’s Professional Company aspires to push the limits of contemporary dance technique, inspiring audiences with its cutting-edge artistry and startling unpredictability. The Company is dedicated to providing provocative, visually arresting and musically stimulating performances for diverse audiences of all ages. Urbanity’s dancers are lifelong learners chosen for their sharp adaptability, dancing prowess, and creative vision. The Company was voted Boston’s Best by Improper Bostonian in 2013, announced Best of Boston by Boston Magazine in 2015, shortlisted for Bostinno’s 50 on Fire, and named a Top Ten Critics’ Pick by The Boston Globe.

Nate Tucker is a musician from Atlanta, Georgia, then later, Fredericksburg, Virginia. Tucker has found a musical path in Boston since 2008. He received music and art education from North Carolina School for the Arts and Boston Conservatory. He has performed in hundreds of shows from the pits of American Repertory Theater, as a drummer, or as a DJ, as well as scoring and directing dance performances at the Dance Complex, Mt. Auburn Cemetery, Greenwood Cemetery, Panorama Music Festival, AS220, Portland Bach Experience, and many others in New England and New York City. Tucker is active performing and supporting improvisation for the Masquerade Ball, Dreamscape, various shows at Dorchester Art Project, Olivier Besson’s Dance Jam, Earth Dance, and is a founding member of the improvisation collective DanceNite.

In 2020 Tucker released the album Change Again, which came to be through a dance performance with choreographer Kristina Bermudez. These songs feature collaborations with the dance, a string quartet, and with singer and mural artist Solei. Graphic Scores: A Reader’s Guide was also released in 2020. For more information, go to GraphicScoresbyNateTucker.com or on social media, @Nate_Tucker, for more information on releases and performances.

Reddit
20/10/2021 19:00:00 20/10/2021 20:30:00 America/New_York Everything: Presented by Valerie Green/Dance Entropy Everything is a dance performance installation evoking the ever-expanding universe, transforming the performance space into a constellation of stars and human bodies in various states of formation ... Museum of Science, Boston, Massachusetts 02114 false DD/MM/YYYY