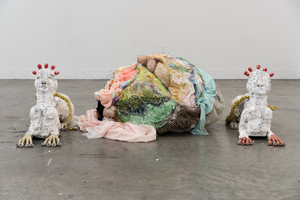 High Five Arts is pleased to present a selection of sculptures and drawings by Estefania Puerta. Born in 1988 in Manizales, Colombia, Puerta immigrated to the United States in 1990. Drawing on her hybrid identity, which includes definers such as Latina, American, immigrant, and female, Puerta examines what it means to simultaneously fall into many categories while not fitting neatly into any of them. In her vibrant and fantastical artwork, Puerta embraces this chaotic brew of cultural heritage and carves out a unique identity from a mass of stereotypes and assumptions. As Puerta explains, “I am playing my own god and creating the world through my erratic reactions of identity.”

Central to Puerta’s work is the human form and an effort to reclaim marginalized bodies from traditional representations. Her drawings, rendered in charcoal, acrylic, pastel, and watercolor, depict strange scenes that often feature surreal interpretations of the female anatomy. Not shying away from the absurd or grotesque, Puerta accentuates toes, breasts, hair, and tears in interpretations of the human body that are at once playful, vulnerable, and unapologetically honest.

This emphasis on physicality extends into Puerta’s sculptural work, which often possesses a highly tactile quality and reveal traces of the artist’s hand. Her material investigations speak to a desire “to understand what it means to have a body that can ache for something unknown to language but deeply rooted in (de)material conditions.” The exhibition will feature a series of new hanging sculptures that resemble chandeliers. Made from materials as varied as wax, strawberries, and knives cast in resin, these alternative light fixtures slowly turn like mobiles suspended from the ceiling.

In "The Pearl" (2017), a floor-based work, two plaster sphinxes flank a rounded mass constructed from swaths of fabric, latex, and fur. Elements of this amorphous “pearl” bear resemblance to human anatomy, yet hover in the ambiguous space between figuration and abstraction. "The Pearl" alludes to two Roman and Greek myths—the birth of Venus and the sphinx’s riddle—that feature female protagonists who represent beauty and terror, respectively. Harnessing the “primitive impulse of mud and flesh,” Puerta’s work serves, in her words, as “an ode to all the lost girls.”