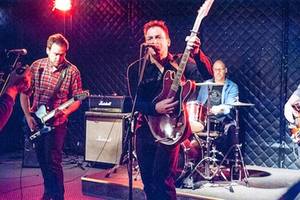 Celebrating the release of their new record " Wind and Swagger!"

Eric is also a member of Jenny Dee & the Deelinquents and has produced and toured with Andrew Greene opening for G Love & Special Sauce tour. His music has been featured on major TV shows and in critically acclaimed movies.

The Almighty Buck (outlaw, roots and rock and roll) is the music of singer, guitarist and songwriter Tim Ko. (short for Tim Kochanski), former main songwriter and leader for one of New England’s most adored bands of the 90s, Cotton Mouth. Leah Ferjulian (bass), Erik Von Doetsch (guitar) and Jeff Woods (drums) round out the band’s refreshing combination of alt-country, roots rock, Americana and alternative music. The Almighty Buck is now on tour in support of their new EP, So Long, releasing later this year and following their 2003 LP Horse and Rider. The EP was recorded and produced by Tim Ko., and mixed and mastered by Joel Plante, who is credited as the only assistant engineer at Das Boot Recordings, the studio of James Guthrie, who mixed and/or mastered nearly every Pink Floyd and Floyd-related release since 1978. It features Tim Ko. (lead vocals, acoustic and electric guitars), Jef Dudziak (bass), Josh Fleischmann (drums), Bethany Brooks (vocals), and New England favorites Michael Dion of Hot Day at the Zoo (harmonica) and Jen Kearney of Jen Kearney and the Lost Onion (piano, organ).