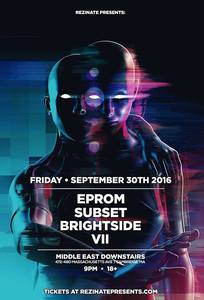 EPROM is one of the vibrant West-Coast scene’s most colourful characters, known for diverse sets which cross the lines between live remixing and manipulation of hip-hop and dubstep with his own obscenely bass-heavy neurocrunk transmissions. He’s a consummate post-millennial producer, and his sound varies from toxic hip-hop to searing garage mutations to bizarre concoctions somewhere in between. His beats jiggle and drip and contort wildly, always in some perpetual state of melting, churning, and mutation.

You can never be completely sure what you’re in for when you see Subset perform - even he isn’t too certain what to expect. Honing his craft over the past six years in the demanding and eclectic New York City scene, Subset has soaked up the variety of music NYC has to offer and developed his unique sound by finding ways to weave all of these loose threads together.

From his weekly bass music party at Webster Hall (BASSment Saturdays) to his renegade sets at festivals around the country to massive sets at Holy Ship!, Camp Bisco, and Burning Man, Subset knows just what to play to set the perfect tone, no matter the setting.

BASSment Saturdays, the legendary bass music weekly Subset hosts and curates at Webster Hall, has become a home and a family for electronic music fans all around the Northeast. Some fans travel hours to be there every week, not necessarily for the headliners, but for the family and the vibes that inhabit that space.

Subset has also been an integral member of the Holy Ship! community known as Shipfam. For years, he has thrown countless preparties, afterparties, renegade sets, and meetups. In 2015, HARD recognized his aptitude for curation and event planning, and tapped him to curate his own stage at all Holy Ship! official preparties. In 2016, HARD recognized the demand that he had built over the last four years, and gave him sets on both Holy Ships.

"A shining ambassador of the more respectable side of dubstep." - Time Out New York

For the 23 year old Queens native producer, Brightside, it's not just about the music, it's about the movement. His vision is to produce auditory art that brings people together and creates a sense of community. Brightside has a predominantly mid-tempo sound, drawing inspiration from all ends of the spectrum. In a conscious effort to reach all audiences, Brightside samples a widely eclectic library of music from all around the world, creating psychedelic sounds with Middle Eastern, Asian, Classic Rock, Hip-Hop and even Reggae flare.

Brightside has watched his vision gain traction in the past year, securing opening spots for acts such as ill.Gates, Break Science, Paul Basic, Kaminanda, Govinda, Futexture, Schlang, and Technicolor Lenses, as well as spearheading a visual project fusing Brightside with graffiti / street art. He is also working on bringing a new Live project into play, combining electronic music with live instruments on stage.