Epidemics, Conflict, and Caregiving Among Native Americans and Puritans 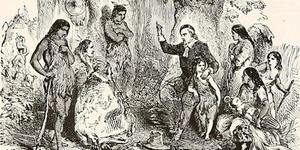 The arrival of Europeans brought a period of unprecedented suffering for the native tribes living in southern New England in the seventeenth century. Early encounters with passing ships set the stage with illnesses (“The Great Dying”) that killed many Massachuset and Wampanoag. Epidemics struck again in 1633 – just three years after the establishment of Boston – when smallpox spread from the colonists into Native American populations throughout the northeast.

While not nearly as deadly as the changes faced by Native Americans, life for the English colonists was also uncertain. For example, only half of the Pilgrims who settled at Plymouth in 1620 survived the first winter. Over the next two decades, many of the colonists who settled Boston, Cambridge, and elsewhere suffered terribly from disease, malnutrition, and exposure.

The relationship of the Native Americans and Puritans during the early years of settlement was complex and often contradictory. Some Puritans celebrated the epidemics that killed many Indians and argued that God was clearing the way for growth of their “city on a hill.” But there are also many examples of empathy and caregiving between the groups during times of illness.

Both the causes of the epidemic and the human reactions were much more nuanced – and humane – than most people realize.

David S. Jones, MD, PhD, is the A. Bernard Ackerman Professor of the Culture of Medicine at Harvard Medical School. As a historian and psychiatrist, he teaches history of medicine and medical ethics at both Harvard College and Harvard Medical School. His first book, Rationalizing Epidemics, examined the history of epidemics among American Indians.

Moderator: Nat Sheidley, PhD, is the Executive Director of The Bostonian Society