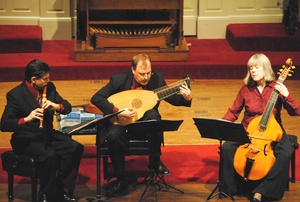 Celebrating its 33rd season in 2018-2019, Ensemble Chaconne concertizes widely in the United States and abroad. The group has been called “a powerhouse of great playing” (Classical Voice of North Carolina) and has been hailed for “vitality and character, style and verve” (MusicWeb International).