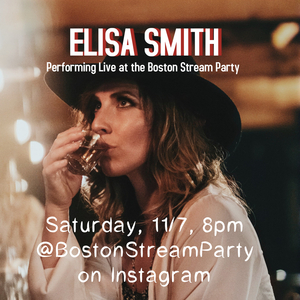 Elisa Smith live @BostonStream Party on Instagram on 11/7 at 8pm!

Elisa loved music from an early age – her earliest memory is gathering her stuffed animals and cuddling in her dad’s guitar case while he practiced gospel tunes for church. In 2017, she hit the road and headed to Nashville to record her debut EP, “Hitch A Ride,” which was released in May of 2018. Featuring talent from Grammy-winning and platinum-status records, the 6-song EP was produced by Johnny Duke, a gifted producer and guitar player who has played with Little Big Town, Miranda Lambert, and Chris Stapleton, among others, and was recorded at Spirit Radio Studio in East Nashville.