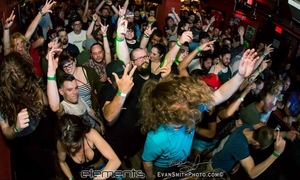 Elements is a weekly Drum & Bass event held every Thursday at the Phoenix Landing in Cambridge, Massachusetts. Elements was founded in January, 1999 by DJs Lenore and Crook. Throughout the years they were joined by co-residents Rando and DJ MDOC, both of whom have since moved out of state. Elements newest resident, Fox (formerly Assembler), joined in January of 2012. Elements has hosted many of the biggest names in Drum & Bass while at the same time supporting the local scene by featuring top local DJs. Elements is now in its 20th year in the same venue, an unheard of feat in the world of underground electronic music nights, earning it the title of Boston’s longest running dance night. Its longevity can be attributed to the guarantee of dope music, good vibes, good peeps, cheap drinks, and a friendly Phoenix Landing staff every week. Come join the Elements family!