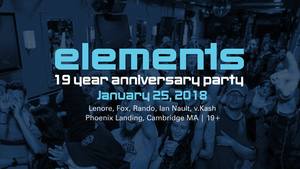 Elements is about to complete it's 19th rotation! Get there early for an extra special opening set by OG resident DJ Rando. Rando has a well-curated jungle/dnb collection and is a wizard on the decks, and he was an integral part of the formation of elements' personality, so bringing him home to play is a dream come true! And limited edition new tees designed by Made in Boston will be unveiled, and these are especially spectacular. Visuals by the masters Ian Nault and v.Kash. See you there fam! Cover $5 before 11pm then $7