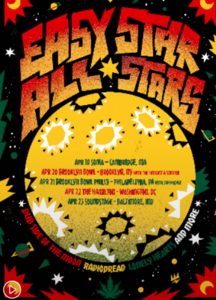 Easy Star All-Stars – one of the best-selling and most revered reggae bands of the 21stcentury – return to touring for the first time since 2019. This spring, the band will be headlining five shows in the Northeast and Mid-Atlantic, as well as appearing at two festivals in New England and one in Mexico. The band will be performing full versions of their best-known album, Dub Side of the Moon – their beloved reggae re-interpretation of Pink Floyd’s Dark Side of the Moon album –along with well-known tracks from their other tribute albums: Radiodread, Easy Star’s Lonely Hearts Dub Band, and Easy Star’s Thrillah. Tickets can be bought here: http://easystarallstars.net.

Fans of the band will be very happy to know that the All-Stars have been hard at work in the studio, working on their first tribute album since the 2012 release of Thrillah. Exactly which classic album will get the band’s unique reggae arrangement has yet to be revealed, but it remains to be seen whether the secret will be spilled by the time these shows happen.

Singer Kirsty Rock, who is the featured vocalist on a number of ESA’s best known tracks, including “The Great Gig In The Sky,” “Paranoid Android,” “She’s Leaving Home,” and “P.Y.T. (Pretty Young Thing),” is also pleased to announce that her first solo album will be coming out May 6, with two singles dropping in late March and mid-April. Songs from this album, entitled Slow Burn, are likely to find their way into the Easy Star live set, especially because much of the album features playing by current and former members of the New York-based musical collective. Look for more info on Kirsty Rock’s album to come in the next month.

The band kicks off these dates with a headlining play at the Mt. Snow ski resort in Vermont on the weekend of March 26. This is followed by another headlining appearance at a reggae festival at Sugarloaf ski resort in Maine on April 9. The band then plays a matinee show on Sunday, April 10, at the Middle East in Cambridge, MA. This is followed by the band’s first 420 show at Brooklyn Bowl in Brooklyn, NY, since 2015. This has been a staple sold-out event over the years. That play will include support by two up and coming bands out of New York, The Far East, and SunDub, who recently signed with Easy Star Records. (SunDub’s first album will be coming out on Easy Star Records later this year.) After that show, the band plays Brooklyn Bowl Philadelphia for the first time, followed by returns to The Hamilton in Washington, DC, and Soundstage in Baltimore, MD. Lastly, in mid-May, ESA flies to Tequila, Mexico, to appear at Akamba Fest.

Blending musical versatility, instrumental prowess, beautiful vocal harmonies and a premier rhythm section, Easy Star All-Stars have established themselves as one of the top international reggae acts on the scene today. Easy Star All-Stars have built a growing, dedicated fan base throughout the world, bringing together fans of reggae, classic rock, dub, and indie rock into one big family. The band has played in over 30 countries on 6 continents since first touring in 2003.