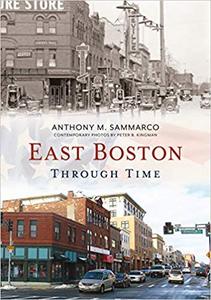 Anthony Sammarco explores a neighborhood of the city of Boston which was once known as Noddle's Island, one of five islands that had been used for grazing of livestock since the 1630s. Development of the two larger islands-Noddle's and Breed's Islands-began in the 1830s under the direction of the East Boston Company, making this one of the city of Boston's first neighborhoods to utilize a formal urban plan. East Boston's harbor location also enabled it to become a center for shipbuilding and some of America's most famous clipper ships were built here. As a port with many employment opportunities, the neighborhood grew rapidly during the age of large-scale immigration. East Boston's immigrants literally came in waves--Canadians in the 1840s, the Irish in the 1850s, Russian and Eastern European Jewish immigrants in the 1890s, and in the first years of the twentieth century, the neighborhood had what may have been the largest Jewish community in New England, as well as Italian immigrants that would dominate the community in the twentieth century. Today with Columbians, San Salvadorans, and other Latinos, it is a community equally diverse and rich in its new traditions. East Boston is more than just Logan International Airport, one of the earliest municipal airports in the country. It is a thriving and engaging community composed of people from all walks of like, a veritable thriving nexus of cultures, and East Boston proudly continues this long tradition of diversity.

Referred to as the “Balzac of Boston History” by the Boston Globe, Anthony Sammarco is a noted historian and author of over seventy books on the history and development of Boston, and he lectures widely on the history of his native city. His books Lost Boston, The History of Howard Johnson's: How A Massachusetts Soda Fountain Became a Roadside Icon, and The Baker Chocolate Company: A Sweet History have been bestsellers and he lectures widely on popular history as well as on Christmas Traditions in Boston.