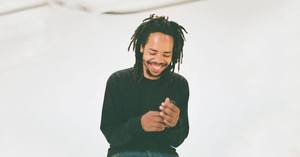 When his music broke through during the great Odd Future explosion of 2010, Thebe Kgositsile never witnessed the rise to fame that his peers enjoyed. Exiled away at Coral Reef Academy, a residential school in Samoa for “troubled youth”, the elusive rap prodigy known as Earl Sweatshirt was denied access to the Internet and cut off from the outside world. Released 18 months after his return, the debut record he named in tribute to his late grandmother Doris has achieved well-deserved critical acclaim, including many picking it album of the year.