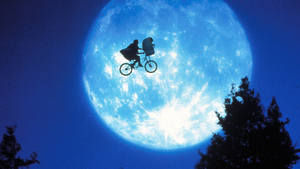 Filled with unparalleled magic and imagination, E.T. follows the moving story of a lost little alien who befriends 10-year-old Elliott (Henry Thomas). Experience all the mystery and fun of their unforgettable adventure in the beloved movie that astonished audiences around the world.

Cars will be parked on the beautiful and historic grounds of Medfield State Hospital, with adequate social distance in between. We’ll be projecting the film onto a 40 foot inflatable screen using state of the art equipment provided by Boston Light and Sound. Larger vehicles will be parked toward the back to avoid obstructed views. Audience members must remain in their vehicles at all times, except when purchasing concessions or using the restrooms. Masks must be worn at all times while you are outside of your vehicle.

We encourage you to arrive early if you would like to walk the grounds before the film begins at sundown, approximately 7pm. These events are rain or shine, and tickets are non-refundable. A portion of the proceeds from these screenings will be used for the care and maintenance of Medfield State Hospital. Please note that tickets are $60 per vehicle, not per person.

Medfield State Hospital is a historic former psychiatric hospital complex at 45 Hospital Road in Medfield, Massachusetts. The asylum was established in 1892 as the state's first facility for the mentally ill. It was formally renamed "Medfield State Hospital" in 1914 and remained in operation until closing its doors for good in 2003. It has also served as the shooting location for the films Shutter Island, New Mutants, The Box, Knives Out, and more.