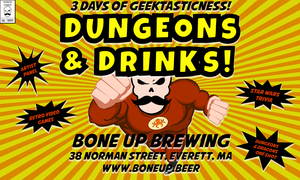 Grab a drink and test your might in a Dungeons & Dragons One-Shot adventure in our side taproom with our Dungeon Master who has 15 years of DnD experience under their belt. In the main taproom we will have the likes of KC Green (Gunshow, He is a Good Boy, This is Fine), Andrew MacLean (Head Lopper, ApocalypiGirl, LaserWolfAttack), Ansis Puriņš (Super Magic Forest, Craft Beer & Brewing Mag), and Adam Cutler (Monday Mosh Monsters) hanging out with us from noon to 4pm. Swing by to say hi and grab some comics, prints, and pieces of memorabilia.

Andrew MacLean, is the creator, artist, and writer of Head Lopper, the Diamond Gem Award-winning series published by Image Comics and the post-apocalyptic sci-fi graphic novel ApocalyptiGirl: An Aria for the End Times published by Dark Horse Comics.

Andrew has also worked for Marvel Comics, DC Comics, Warner Bros., Hasbro, etc. on a variety of projects in both comics and animation. He is also a co-founder and the creative director of the lifestyle brand, Laser Wolf Attack, where art and apparel meet the street.

Ansis Puriņš is a freelance illustrator and cartoonist based in Boston, MA. When he’s not immersed in the world of the Super Magic Forest, he’s making comics for Craft Beer and Brewing Magazine and working on other projects for clients. He has won grants from the Xeric Foundation as well as the Massachusetts Independent Comics Expo (M.I.C.E.) for his work.

Drawing inspiration from extreme bands, ‘90s comics, and 16-bit video games, Adam Cutler deftly treads a line between eerie and whimsical to produce loud work for loud clients. A native of Maine with a graphic design degree from the New England Institute of Art, Adam currently works out of his home studio in central Massachusetts alongside his wife and two cats.

Some of his work has been published in the books Metal & Hardcore Graphics: Extreme Artworks from the Underworld (Loft Publications), Black and White Volume 4 (Out of Step Books), and Pandemonium: An Extreme Metal Art Gallery (Republic). …And he has been drawing a monster every Monday since 2011, creating Monday Mosh Monsters.

KC Green makes comics, most notably Gunshow, BACK, and He is a Good Boy. His comics have been seen on The Nib, Mad Magazine, and elsewhere online along with doing commercial work for the likes of Boom! Studios, Adult Swim, Cartoon Network, Cards Against Humanity, Nickelodeon Magazine, and US Gamer. But you probably know him from his comics turn memes This is Fine dog, Staredad, and Dick Butt.