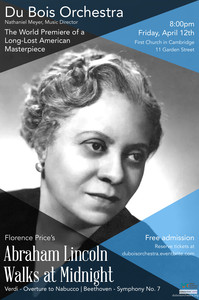 CAMBRIDGE, MA -- On Friday, April 12, 2019, the Du Bois Orchestra and conductor Nathaniel Meyer will perform a free community concert at the First Church in Cambridge, Congregational. The concert features the world premiere of a long-lost oratorio by the African-American composer, Florence Price: Abraham Lincoln Walks at Midnight. Joining the orchestra to perform the work are singers from Lyricora, a chamber choir that performs throughout New England, and soprano, Sarah Cooper, one of Boston’s most exciting young emerging soloists. Also on the program are Verdi’s Overture to Nabucco and Beethoven’s Symphony No. 7.

During her lifetime, Florence Price (1887-1953) was a prolific composer who was the first African American woman to have a work performed by a major orchestra, and studied in Boston at the New England Conservatory. Although she received widespread acclaim after the premiere of her prize-winning Symphony in E minor and composed over three hundred works in her life-time, she and her works drifted into obscurity.

The manuscript of Abraham Lincoln Walks at Midnight was recently rediscovered among a large collection of Price manuscripts rescued from an abandoned house in a suburb of Chicago, the composer’s former summer home. It is scored for orchestra, chorus, organ, piano and soprano soloist. Composed in the wake of World War II, this triumphant composition is also a fervent prayer for peace in turbulent times, based on the iconic poem by the American poet Vachel Lindsay.

The Du Bois Orchestra, founded by Harvard students in 2015 to make music a means of overcoming social exclusion, has exploded onto the local musical scene. It performs to large, diverse audiences, and elevates underrepresented composers by performing their works alongside works from the traditional classical canon. The orchestra features talented musicians from Harvard, New England Conservatory, Longy School of Music, Boston Conservatory, Boston University School of Music, and Berklee, as well as members of the local musical community. The seminal Harvard sociologist W.E.B. Du Bois, who combined music, sociology, and philosophy to fight for social equity, serves as its inspiration. The orchestra also performs educational outreach concerts and outreach programs for youth in addition to its regular concert schedule. Inspired by Du Bois’s vision of inclusivity, all concerts are free and open to the public.

This program is supported in part by a grant from Cambridge Arts, a local agency which is supported by the Mass Cultural Council, a state agency.