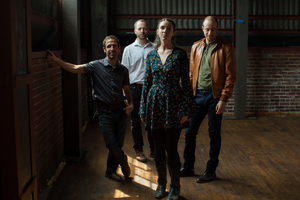 ​The energy of rock n’ roll is impossible to categorize – mercurial, specific to its beholder and profoundly reflective. From the Binghamton, New York music scene comes Driftwood, a band with a rock n’ roll soul and a folk art mind. Carving out a name for themselves with electrifying live performances, they bring one of the most unique, raw sounds to the Americana/roots music scene. Incorporating upright bass, banjo, acoustic guitar and violin, the ghost of traditional American folk music lives in their palette. But the melodies, the harmonies and the lyrics are something else entirely.Coming from a town not often recognized for music but predominantly for industry, being the home of Twilight Zone author Rod Serling and donning the title of the “Carousel Capital of the World”, it’s easy to wonder how this not-so- traditional string band came out of the Binghamton music scene. “What people don’t often realize is that bands like Old Crow Medicine Show, The Horseflies and The Highwoods String Band came out of this same area and had a huge influence on us”, says Forsyth. “We played a lot of old-time in the beginning and it was a huge part of our band learning to play music together”.

Formed in 2005, the band spent four years playing just about anywhere they could. “We just wanted to be able to play for any crowd and turn heads”, says banjo player Joe Kollar. After the release of their Debut CD “Rally Day” in 2009, the band has spent most of the last 4 years on the road. With club and festival appearances alongside of artists such as Bela Fleck, Old Crow Medicine Show, Rusted Root, Del McCoury, Brett Dennen, The Wailers, Railroad Earth, Robert Randolph, Rubblebucket, Leon Russell, Emmylou Harris and Donna the Buffalo, Driftwood is making serious waves on the East Coast scene. In the last three years they’ve played over 500 shows. With the release of their second CD “A Rock & Roll Heart” in 2011, the band landed spins on a slew of great radio shows and stations such as WFUV’s Sunday Breakfast with John Platt (New York, NY); KZSU (Stanford, CA), WCBE (Columbus, OH), WNRN (Charlottesville, VA), WUNC (Chapel Hill), NC and WDVX (Knoxville, TN).

In November 2012, Driftwood started work on their third and latest CD. Despite a grueling tour schedule and very little time at home, the recordings were finished in the summer of 2013. The self-titled new disc was recorded in a church outside of Ithaca, NY with Grammy-winning engineer Robby Hunter. It was released on December 3rd, 2013.