Dreaming the Sphinx in Augmented Reality 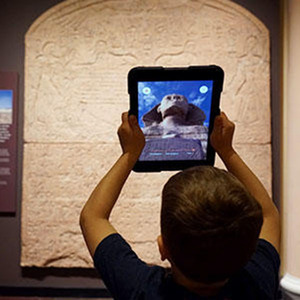 Dreaming the Sphinx in Augmented Reality

Between the paws of the great Sphinx is the Dream Stela, a monument which describes how a young prince fell asleep in the shadow of the Sphinx by the Giza Pyramids. The Sphinx promised young prince Thutmose IV the throne if he would clear away the sand covering its body. Visitors to the Harvard Semitic Museum galleries will be able to experience the iconic Sphinx and its Dream Stela in 3D augmented reality. A gallery facilitator will use a tablet to allow the Sphinx to loom above and around a real life-size cast of the monumental stela. With a tap, the ancient hieroglyphs will be highlighted and translated into English. Another tap to adjust the timeline later, and a pyramid will become visible. Yet another display will conjure a St. Bernard-sized Sphinx on the gallery floor, rendered as it is now, or during the Old Kingdom (partially painted), or New Kingdom (fully painted as some scholars propose).