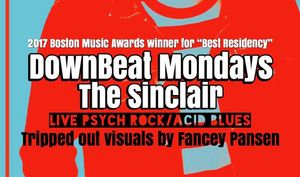 After a successful run at the Plough and Stars in Cambridge, Matthew Stubbs and the Antiguas bring their Downbeat Mondays acid blues/psych rock series down the street to the Sinclair in Harvard Square.

Check the Sinclair's website for listings and special guests: http://www.sinclaircambridge.com/

“Even I have a hard time describing this album,” Matthew Stubbs admits. “People hear it, and ask, ‘What kind of music is this?’ No idea! And I’m happy about that.”

As he should be. The self-titled debut from Matthew Stubbs & The Antiguas is a decidedly diverse and propulsive affair, combining psych rock with garage rock, acid blues, Afrobeat and funk (amongst several other styles). It’s also cinematic — at times, it feels like you’ve been invited to hear the world’s coolest soundtrack (note, there is a song called “Tarantino”).

“The other question people ask is, ‘Why don’t you have a singer?’ Well, back in the day, in the ‘50s and ‘60s, you had guys like Booker T, Link Wray, Dick Dale and Duane Eddy. They had bona fide hits as instrumentalists! I’d like to bring back that spirit to popular music.”

While this is his first record as part of the Antiguas, Stubbs had previously made his name as a solo performer, releasing two albums in the Memphis soul/blues tradition, Soulbender (2008) and Medford and Main (2010). As well, the Boston musician (and a guitarist since the age of 13) has served as the guitarist for Charlie Musselwhite since 2007 — that’s him on the legendary bluesman’s 2014 Grammy-winning album Get Up!.

For the Antiguas record, however, Stubbs tapped into previously unexplored influences. You’ll hear a seemingly perfect 60s spy movie homage (“Fistful”) mixed with British Invasion/garage rock nods (“Unwinder”), organ-fueled jazz/funk (“Dub Stubbs”) and psych-fueled epics (“Bastille Day”). And then there’s the groovy finale “Tarantino,” which even Stubbs sees as an album outlier. “The title came afterwards, but it does seem like a song you’d hear at the end of a Tarantino film, where people getting murdered but there’s happy music.”

Overall, think of the Antiguas as a timeless musical statement that nods to the past but lives in the here and now. “It’s meshing vintage sounds with modern tweaks,” says Stubbs, counting the likes of Tom Waits and Beck as influences. “It’s lo-fi mixed with hi-fi sounds.”

Stubbs started performing with the Antiguas in 2016. In the band’s brief time together, they’ve already been nominated for three Boston Music Awards and developed quite the live show reputation, where any given night could see double organ throwdowns or trippy visual projections (along with stellar musicianship, natch). The live group consists of Stubbs, Chris Rivelli (drums), Marc Hickox (bass) and Justin Lopes (organ).

In the end, it really doesn’t matter if you can “define” Stubbs and his new music. He’s making fans that transcend labels or genres.

“Our crowd is diverse — it’s twentysomethings, indie kids, the jam band crowd, older crowd relating to seeing something at the Fillmore,” he says. “The good news is that everyone seems to like it.”

Reddit
28/01/2019 22:00:00 29/01/2019 00:00:00 America/New_York Downbeat Mondays feat. Matthew Stubbs & The Antiguas After a successful run at the Plough and Stars in Cambridge, Matthew Stubbs and the Antiguas bring their Downbeat Mondays acid blues/psych rock series down the street to the Sinclair in Harvard Squ... The Sinclair , Cambridge, MA 02138 false DD/MM/YYYY