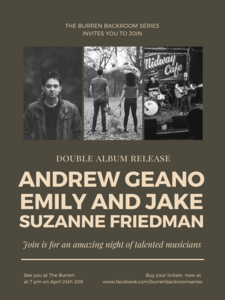 Andrew is a Boston based singer-songwriter, specializing in a unique blend of power-pop and alternative folk. Andrew cut his teeth and refined in the Greater Boston scene, playing cover gigs, hosting open mics, and performing at private events. He would then focus his efforts entriely on his writing. Having released his first single ("Martyr") on Decemeber 8, 2019, Andrew will finally be releasing his debut LP on April 24, 2019.

Andrew's music is style is equally influenced by the anthemic grandiose of bands like Radiohead and Brand New, the intimate confessionals of singer-songwriters like Jason Isbell and Liz Phair, and the endearing quirkiness of acts like Todd Snider and Elvis Costello.

Formed between Boston and Portland ME, Emily and Jake are a folk/Americana duo who create gracefully warm music with effortless harmonizing, easy melodicism, and raw honesty. “Beautifully simple and understated” states Ian Miller from For The Love of Bands. Imagine their sound as a combination of Mumford and Sons, The Head and The Heart, and Fleetwood Mac. They their debut album St. Augustine dropped on April 3rd, 2019 and is available on all music platforms.

Suzanne Friedman (Suz) is a Boston-based songwriter and musician. Her catchy acoustic tunes have the perfect combination of folk, pop, rock, and blues. Friedman draw inspiration from the people that come in and out of her life and the places she has lived and visited. The authenticity in her music is captivating and the band accompanying her adds another dimension to her songs!