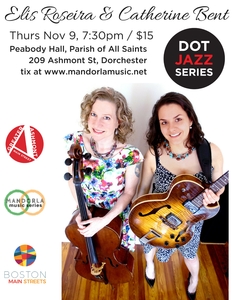 Greater Ashmont Main Street and Mandorla Music Series are very pleased to co-present the 2017-2018 quarterly Dot Jazz Series at Peabody Hall in the Parish of All Saints Ashmont. Doors open at 7pm and the $15 ticket includes dessert as well as non-alcoholic beverages. Wine will be available too. Beyond the music, why not plan a full night in the Greater Ashmont Main Street district? All ticket holders for the November 9 show are eligible to receive 15% off their pre-show dinner check at Tavolo Ristorante (exclusive of alcohol, tax, and gratuity, as required by law). Simply show your ticket confirmation (electronic or paper print out) from Brown Paper Tickets to your server to take advantage of this offer.

Artists for this November date are Elis & Catherine. Cellist Catherine Bent is from London and now lives in the Boston area, and guitarist and vocalist Elis Roseira was born in Germany and has lived in Rio de Janeiro, Boston and Munich. The two musicians met during a New England winter, and discovered that both were under the spell of Brazilian music.

Catherine Bent has played her cello in jazz, classical, and contemporary music, and been inspired by the music of many cultures. She played electric cello for Cirque’s North American Tour of “Quidam” and remains on their artists’ roster. Catherine is on the faculty of Berklee College of Music and is an active freelance musician in Boston and New York City. She lives for several months of every year in Rio de Janeiro, in order to drink deeply from the source of choro, samba and bossa nova. Catherine’s compositions can be described as “chamber jazz”, bringing the organic phrasing of European art music into the world of rhythmic groove. Her many teachers have included jazz pedagogue Charlie Banacos and modern choro master Maurício Carrilho.

Elis Roseira has played and sung jazz, Brazilian styles, and classical music. She is the leader of the multi-instrumental duo “Céu e Mar” and plays the archetypal swing-diva in the trio “Horst und ihre Männer”. Elis studied with Peter O’Mara, Freddie Bryant, Nando Michelin, Pat Pattison, Celia Malheiros, Maurício Carrilho and Bernardo Aguiar to hone her artistry on the guitar, her voice, arranging, composing, percussion and the flute.