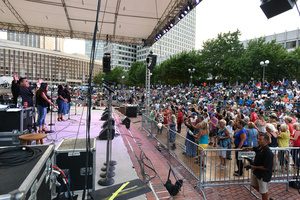 Now celebrating 45 years as Boston’s longest-running outdoor concert series, these performances feature exciting entertainment for music lovers of all ages. This series is presented by Mayor Walsh in partnership with the Boston Parks and Recreation Department, and Mayor’s Office of Tourism, Sports, and Entertainment.

The title sponsor for this series is Bank of America.