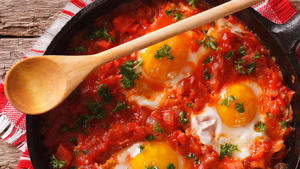 The brunch series kicks off on Sunday, Jan. 7, noon to 3 p.m., and will take place at the same time each Sunday this winter in the heart of Boston at Dorchester Brewing Co. (1250 Massachusetts Ave., Dorchester).

Shakshuka is a rich, savory Israeli stew of tomatoes, spices and sunny poached eggs that’s enjoying an ascendant moment right now with the rise of modern Middle Eastern cuisine across the United States. Shemtov was among the very first chefs in Greater Boston to serve shakshuka and it pairs deliciously well with craft-brewed local beer on those lazy winter Sundays.

Shakshuka will serve as the centerpiece of Chubby Chickpea’s brunch menu, which will also feature (among other dishes):

“Shakshuka is an Israeli comfort-food classic served across the Middle East that’s enjoying a surge in new-found popularity here in the United States,” said Shemtov. “We’re excited to have an opportunity to share our shakshuka and Chubby Chickpea’s other delicious sweet-or-savory brunch plates with the great folks at DBC and their many local-beer-loving fans.”

Guests can enjoy Chubby Chickpea’s shankshuka brunch with the year-round and latest seasonal brews from Dorchester Brewing Co., including Dorchestivus Resolution Berliner, Clapp’s Cream Ale, Embarrasment of Riches and any of their 20 partner brews and DCB-branded beers on tap.