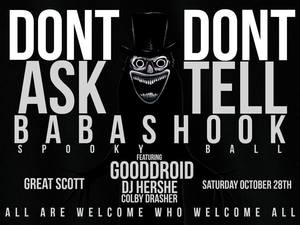 This October... Boston's longest running QUEER party will keep you holding your breath... and watch you lose it.

Let's get scary and wild like only the queer community can-
Halloween is a time when everyone dresses up, so there is really no reason to be afraid~~~ just take this candy from me little boi.

And we wont skimp on our end of the deal either- Prepare to be blown away by the DJ talent we have lined up!

Hailing from Brooklyn, NY, and finally returning back home from many years Miami, Adrianna “Gooddroid” Moschides is no stranger to the behemoth that is Bass music. DJ’ing for over 12 years, her name has become synonymous with all things Bass, as she shared the decks with some of the best in the business.

Staying true to her roots – the deeper side of bass – she has managed to convert even the biggest skeptics into fans. In a city that does not tend to gravitate towards “deeper”music, she managed to find a home for the bass community in her bi-weekly party, ‘Down’, which brought some of the scene’s biggest headliners to Miami for the first time.

It’s only fitting she is now the president and C.E.O of Loveless Records, providing worldwide releases tailored to forward-thinking Bass music and techno. Approaching over thirty artists signed, Gooddroid has managed to gather some of the most talented up and coming artists, all under one roof. Loveless has been featured on XLR8R, DJ Mag, Mixmag, Thump, among others, and continues to build momentum. Gooddroid is also the host of Loveless FM, a monthly radio show on newly founded radio station, The Lot Radio. Every week showcases the best and the brightest in all things Club, Bass, and beyond; featuring guest DJ sets from top international artists.

Gooddroid also started a monthly Vogue night with her partner that has been running for four years, giving the ballroom community a place to shine and win cash for their talents while also introducing the mostly underground scene to the general public. Catwalk has received critical claim and mainstream success, and was voted Best Monthly Party in Miami by the Miami New Times.
She holds several residencies in Brooklyn and Miami and has toured nationally and internationally.

HerShe is a self taught multi-talented Artist/Producer. At a young age she started Beatboxing at 11 and spinning at 14. She incorporates both Beatboxing and DJing into her live sets, diversifying herself from the average performer. HerShe has played at SXSW in Austin, TX three years in a row, is the 2016 518 Beatbox Battle Champion in New York, and has spun and performed in various Clubs, Shows, Concerts in and around Boston, (such as The House of Blues, The Sinclair, Machine, Goodlife, The Middle East, the MFA for the MFANOW), New York (including Hot Rabbit, and le Poisson Rouge). HerShe is represented by the media company The Color Agent, has performed with Redbull, Shure Microphones, Jessie Reyes, Drezo, BreZ (from Empire), Gizzle, The Beatbox House, (etc) and had been featured on platforms such as Shure.com, Sensu Music Magazine, lstylegstyle.com, austinchronicle.com, digboston.com, and has been noted as one of the top 5 most anticipated LGBTQ acts for SXSW listed with Ruby Rose.

Host and Resident DJ of DADT since its inception, Colby has been DJing consistently for 15 years. He is currently resident DJ at 4 parties throughout Greater Boston. He has played on stage at many of the largest venues in the city and opened for international artists, such as Peaches, Le1f, Mykki Blanco, Cakes Da Killa, Pansy Division, Pictureplane, Venus X, MikeQ and more.

A dark and mystifying DRAG SHOW hell bent on your destruction!! If you have been to DADT before you know that we encourage our performers to explore the bounds of drag beyond its conventional realm *** so you can imagine Halloween is a great time to go all out!

Featuring demons on the night:

DONT ASK DONT TELL
“ALL ARE WELCOME WHO WELCOME ALL” ‘straight’ to Hell!
21+
Only $10 ALL NIGHT!!
Great Scott