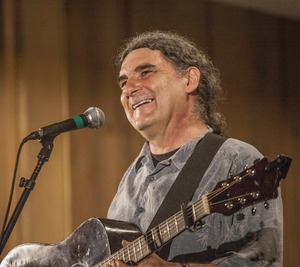 Don White will be performing at OCC Coffeehouse at the Original Congregational Church in the center of Wrentham on Saturday, Feb. 2, 7:30 p.m. There is no one-word description for what Don White does. He has survived and thrived for twenty-five years, bringing his audiences to laughter and tears in his live performances, studio recordings, and on the printed page. He is a storyteller-comedian-author-troubadour-folk singer-songwriter. He is a walking challenge to the phrase “file under.” Best to just sort him under “Don White.”

Don’s approach to music is a weird, unique blend. If he just played folk music, it would be a handy label. But he has invented his own genre with a mix of humor and powerful songwriting. White’s arc as a writer and performer has taken him from his industrial hometown of Lynn, Mass. across the country as hitchhiker, through Boston’s comedy clubs and coffeehouses, and onto the stage with greats like Christine Lavin, Arlo Guthrie, Taj Mahal, Ritchie Havens, Patty Larkin, Bill Morrissey, Tom Rush, and Louden Wainright III. At every point, White has been the ultimate observer, infusing his work with his experiences as a husband, a father, a seeker, and a joker.

Many songwriters use their real lives for inspiration, but few do it like White. He often draws inspiration from his family, whether it’s a touching song about the circle of life or an uproarious story about dealing with his daughter. “It’s what I’m comfortable doing. It’s what I know. I’m always amazed by people who write songs about the Civil War in a convincing way and were never there. I assume they were never there. Write about what you know. I’ve been raising kids and being in a relationship since I was a kid myself. I mean, I could try to write about other things, and I do, occasionally, but that’s what I know best.” Lots of information about Don, his many CDs, and his tour schedule can be seen on his website at www.donwhite.net.

Mike Agranoff, opening for Don, is equally at home in the contemporary and traditional camps of the Folk world. His prime instrument is the guitar, upon which he shines with intricate fingerstyle arrangements of anything from Tin Pan Alley tunes of the '20s to fiddle tunes to his own music. He also plays concertina, piano, banjo, or sings acapella. He can be uproariously funny, contempletive, and powerfully emotional in the space of a few minutes. Not so much a singer-songwriter as a "singer-songfinder, Mike takes great delight in discovering the little-known hidden gems, polishing them with his own distinctive style, and bringing them to the light of day where they sparkle.

Tickets for the concert are $20 in advance and $25 at the door, available at the church office, 508-384-3110, or at www.musicatocc.org. The event will be in Fellowship Hall at the back of the church with entry from the parking lot behind the church. Parking is available behind the church and in the lot across the street. For more information and to be added to the mailing list, visit the website or contact Ken Graves, 508-384-8084, occmusic99@gmail.com.