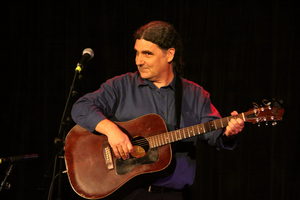 Don White Show to Raise Money for the Saint Vincent de Paul Society
A night of music, laughter and storytelling September 16 with doors opening at 7 p.m. and live music starting at 7:30 p.m.

Singer/songwriter/storyteller Don White plays a fundraiser for Saint Susanna’s Saint Vincent de Paul Society September 16, 7PM at Saint Susanna Parish. The show is the second of three “Signature” events produced by the Good Art Series and the Roslindale Open Mike (ROM).
There is no one-word description for what Don White does. He has survived and thrived for twenty five years, bringing his audiences to laughter and tears in his live performances, studio recordings, and on the printed page. He is a storyteller-comedian-author-troubadour-folk singer-songwriter.
White started out as a songwriter and took a detour through Boston’s swinging comedy scene in the early 90s before coming back to the city’s venerable folk scene with a whole new approach. White now had the toolkit of both songwriter and club comedian.
White has long headlined his own emotional and uproarious shows, and he’s shared the stage with legends like Arlo Guthrie, Taj Mahal, Ritchie Havens, and The Band. Since 2008 he has been touring North America with Legendary Singer-songwriter/Comedienne Christine Lavin in a show called The Funny Side of the Street. In 2017 he will be performing with nationally renowned storytellers Bill Harley and Bil Lepp in a new show that takes a comedic look at the lives of Dads called Father's Daze.
He has released six studio albums, two live albums, a greatest hits collection, and a joint live album with Christine Lavin, as well as three DVDs and his autobiography, Memoirs of a C Student. His latest DVD, Once More.. With Feeling, and his new CD, More Alive, are available now at www.donwhite.net and www.nimbitmusic.com/donwhite.
The Society of Saint Vincent de Paul is a Catholic lay organization that leads women and men to join together to grow spiritually by offering person-to-person services to the needy and suffering in the tradition of its founder, Blessed Frederic Ozanam, and patron, St. Vincent de Paul. The third Signature show features Jon Finn and Steve Marchena October 21 at Saint Susanna Parish. The Roslindale Open Mike is held on the second and fourth Mondays of the month at the Roslindale Congregational Church.