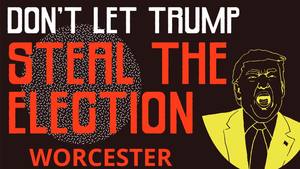 The stakes have never been higher. Working class people face the combined threat of the pandemic, an economic crisis, and climate change.

Trump insists the election results will only be legitimate if he wins. He has made clear threats to steal the election through some combination of voter suppression, ballot tampering, and prematurely declaring victory before all ballots have been counted.
We need to prepare now for mass action and even strikes if Trump tries to steal the election. If the past four years have shown us anything, it’s that the Democratic establishment can’t effectively stand up to Trump. If they couldn’t stop Trump's massive tax cuts for the wealthy, horrific ICE arrests and detention, or the nomination of two - maybe three - ultraconservative Supreme Court justices, we can’t afford to sit back and rely on them now.

Even if Biden wins on election night, we can’t waste a moment making our voices heard over the Democrats’ corporate donors. It will take huge pressure to win desperately needed measures like Medicare for All and a Green New Deal under Biden, who promised billionaires that nothing would fundamentally change for them under his presidency
Workers, youth, progressives, and activists need to be ready to take to the streets on November 4th! We have to stop Trump stealing this election and demand that nobody is declared winner until every vote is counted.

All out to fight Trump’s attacks on democracy and defend the vote!

We need as many people on board as possible! Contact us if your organization can co-host and mobilize!