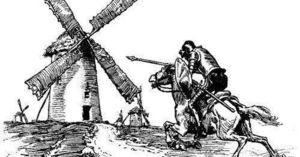 Sarasa Ensemble’s opening program for the 2020-21 season “On the Fringe” celebrates world literature’s original anti-establishment hero, Don Quixote. This unforgettable character, created by Miguel de Cervantes (Part I in 1605 and Part II in 1615), embarks on a journey in search of chivalrous adventures, such as saving damsels in distress, combatting giants in the guise of windmills, and in general righting wrongs. In his quest to overcome his own limitations, Don Quixote dreams to be what he is not— and does not give up. The great theatrical aspect of his heroic exploits with his trusty and patient squire, Sancho Panza, and overextended horse, Rocinante, inspired many musical interpretations. Sarasa will present two one-hour concerts of 18th-century compositions based on the tales of Don Quichotte with works by Telemann, Boismortier and Francesco Conti, including readings from Cervantes’ text.

“The truth may be stretched thin, but it never breaks, and it always surfaces above lies, as oil floats on water.”
― Don Quixote, Miguel de Cervantes

“When life itself seems lunatic, who knows where madness lies? Perhaps to be too practical is madness. To surrender dreams — this may be madness. Too much sanity may be madness — and maddest of all: to see life as it is, and not as it should be!”
― Don Quixote, Miguel de Cervantes