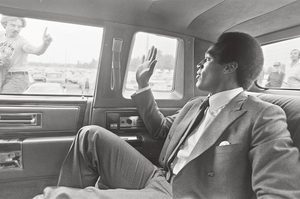 Co-presented by the DocYard, the Roxbury International Film Festival, and the UMB Film Series, and the Non-Fiction Cartel.

7.5 hour film broken out into three viewing sessions -- watch the film as a three-part marathon on Monday, or pace your viewing over three days.

Either way, please join us on Monday at 7pm for Part Three, followed by Q&A with director Ezra Edelman!

Price per screening segment is $12 ($10 for students). Special ticket price of $25 to attend all three parts, for those interested in seeing the film in its entirety. DocYard passholders can attend all 3 screening segments as part of their season pass.

It is the defining cultural tale of modern America – a saga of race, celebrity, media, violence, and the criminal justice system. And two decades after its unforgettable climax, it continues to fascinate, polarize, and even, yes, develop new chapters. Now, the producers of ESPN’s award-winning “30 for 30″ have made it the subject of their first documentary-event and most ambitious project yet. From Peabody and Emmy-award winning director Ezra Edelman, it’s “O.J.: Made in America”.

“O.J.” revisits – and redefines – it all. The domestic abuse. The police investigation. The white Bronco chase. The trial of the century. The motive, the blood, the glove. The verdict. The aftermath. Drawing upon more than seventy interviews- from longtime friends and colleagues of Simpson to the recognizable protagonists of the murder investigation to observers and commentators with distinct connections to the story – the docu-event is an engrossing, compelling, and unforgettable look at a tantalizing saga. Because at the end of what seems like a search for the real truth about O.J. Simpson, what’s revealed just as powerfully is a collection of indelible, unshakeable, and haunting truths about America, and about ourselves.

“For its part, ‘O.J.: Made in America,’ directed by Ezra Edelman, has the grandeur and authority of the best long-form nonfiction. If it were a book, it could sit on the shelf alongside ‘The Executioner’s Song’ by Norman Mailer and the great biographical works of Robert Caro.” – AO Scott / NY TIMES

Ezra Edelman is an award-winning filmmaker. In 2014, he directed two films, Requiem for the Big East and The Opposition, which aired as part of ESPN’s acclaimed 30-for-30 documentary series.

In 2013, Edelman co-produced the documentary Cutie and The Boxer, which was nominated for Academy Award.

He also has produced and directed three films for HBO, including Magic and Bird: A Courtship of Rivals, which received a Peabody Award and was nominated for three Emmys. He produced and directed, Brooklyn Dodgers: The Ghosts of Flatbush, which won an Emmy and The Curious Case of Curt Flood.

Before beginning work in documentaries, Edelman spent seven years as a producer on the news magazine show, Real Sports w/Bryant Gumbel, during which time he won four Emmys.

A native of Washington D.C., Ezra graduated from Yale University and currently lives in Brooklyn.