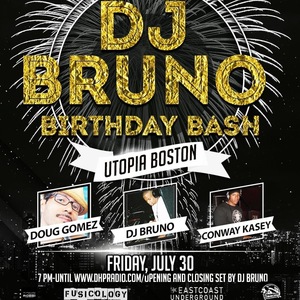 It’s that time of the year again when I'm reminded that I'm not getting any younger. This year my good brother's Doug Gomez & CK himself Conway Kasey will be helping me celebrate on the ones & twos. So you know it's gonna be nothing but pure heat. We're most definitely going into the late night with this show. That's if I'm still standing!!!!!

P.S. I'm dropping a few BIZ MARKIE joints as a tribute for the diabolical one

DOUG GOMEZ BIO:
New York’s own Doug Gomez started his musical career as a DJ, honing his skills with the explosions of Hip Hop, House Music and dancehall genres dominating the NYC club scene at the time.
As a true New Yorker of Colombian roots, his love for drums and sophisticated melodies led him to embrace the path from Deejaying to business then eventually to production. He worked for the German powerhouse ZYX Music & NYC’s Waako Records as A&R/promotions director and label manager.
Doug desire to express his love through production for what he affectionately calls “That New York sound”, a mix of organic, soulful music, combined with afro latin rhythms, was evident on his 2016 releases. His productions led to an onslaught of releases on such notable labels including MoBlack, Offering recordings, Sole Channel, Tambor Music, King Street Sounds, Global Diplomacy and many more. All of which led him to be nominated # 9 on the traxsource.com, top afrohouse artists of 2016.
2017-2018 saw the start of his own label Merecumbe Recordings, as an outlet not just for his own music, but from current hot and upcoming producers. Doug was also nominated #2 Afrohouse artist 2018 and #19 overall artist by traxsource.com. In 2019, Doug dominated the afrohouse scene and was nominated the #1 afro house artist and #7 soulful house artist by traxsource.com.
Doug’s musical expression crossed over to afrocumbia and Salsa rhythms in 2020 where he will continue to grow and experiment with new sounds.

CONWAY KASEY Bio:
Started out his musical journey through dance in The late 80s early 90s traveling all over the world performing dance theater. He was introduced to the NYC house scene at a very young age moving and grooving to the best music house music. The love for music that was in Conway came from the musical talents of his mother and father who perform back in the early 70s in a reggae band. from there Conway started to experiment with music production and Spinning on Vinyl in the 90s trying to find his sound in the house Industry. With the love and determination to keep striving to get better at his craft you can now hear Conway Kasey’s Music being played by Dj’s all across the world and can be found on all music platforms.