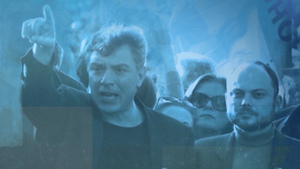 "NEMTSOV" a film by Vladimir Kara-Murza

Q & A session and discussion with Vladimir Kara-Murza will follow the screening.

Nemtsov chronicles a remarkable political life. It is a story told by those who knew Boris Nemtsov at different times: when he was a young scientist and took his first steps in politics; when he held high government offices and was considered Boris Yeltsin’s heir apparent; when he led Russia’s democratic opposition to Vladimir Putin. The film contains rare archival footage, including from the Nemtsov family. Nemtsov is a portrait. It is not about death. It is about the life of a man who could have been president of Russia.

Vladimir Vladimirovich Kara-Murza is a Russian opposition politician. He serves as vice chairman of Open Russia, a NGO founded by Russian businessman and former political prisoner Mikhail Khodorkovsky, which promotes civil society and democracy in Russia. He was elected to the Coordinating Council of the Russian Opposition in 2012, and served as deputy leader of the People's Freedom Party from 2015 to 2016. Kara-Murza holds an M.A. in history from Cambridge University.