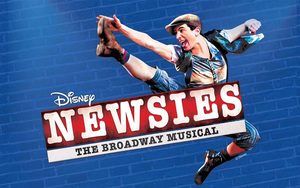 The Franklin Performing Arts Company presents Disney's Newsies starring Broadway's Christopher Rice! Set in turn-of-the century New York City, Disney's Newsies is the rousing tale of Jack Kelly, a charismatic newsboy and leader of a band of teenage "newsies." When the titans of publishing raise distribution prices at the newsboys’ expense, Jack rallies newsies from across the city to strike against the unfair conditions and fight for what's right!

Based on the 1992 motion picture and inspired by a true story, Disney's Newsies features a Tony Award-winning score by Alan Menken (Little Shop of Horrors, Sister Act) and Jack Feldman and a book by Tony Award winner Harvey Fierstein (Kinky Boots). Choreographed by Chaz Wolcott (Disney's Newsies, So You Think You Can Dance, Cats) Disney's Newsies features the now classic songs “Carrying the Banner,” “Seize the Day,” and “Santa Fe.” Disney’s Newsies is packed with non-stop thrills and a timeless message, perfect for the whole family and every audience. Runs October 13, 14 and 19-21 at THE BLACK BOX.

Christopher Rice (Jack Kelly) appeared on Broadway in The Book of Mormon, in the national tours of West Side Story and Irving Berlin's White Christmas, and in The Most Happy Fella at Encores!. Rice's viral tap dance video series #TAPPY has been seen by over 3 million people worldwide.

Ali Funkhouser (Katherine Plumber) appeared in the national tours of Joseph...Dreamcoat and Evita. Other credits include Legally Blonde at The LEX and Puccini’s Suor Angelica with Chelsea Opera (NYC). Last season, she was seen on the FPAC stage as The Narrator in Joseph...Dreamcoat.

Nick Paone (Joseph Pulitzer) has traveled all over the US performing with TheaterWorks, USA. His regional credits include Cabaret, Macbeth, The Wedding Singer, Little Shop of Horrors, and Pirates of Penzance. An FPAC favorite, Nick is the creative mind behind Humbug! A Beggar’s Opera and the annual holiday pantos.

Chaz Wolcott (Choreographer) spent two years touring as Buttons in the First National Tour of Disney’s Newsies, visiting 70 cities and performing over 750 performances. He is also featured in the live film version of the show from Hollywood’s Pantages Theatre, which was released in movie theaters as Disney's Newsies: The Broadway Musical. He was featured on FOX's "So You Think You Can Dance" where he jumped on Mary Murphy's Hot Tamale Train to the Academy in Season 14!