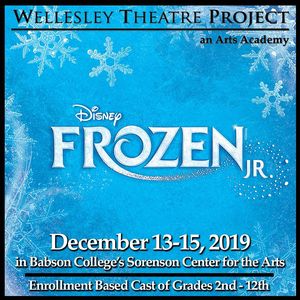 Based on the 2018 Broadway musical and the 2013 Disney film, Disney’s FROZEN, JR brings Elsa, Anna, and the magical land of Arendelle to life, onstage. A story of true love and acceptance between sisters. When faced with danger, Princesses Anna and Elsa discover their hidden potential and the powerful bond of sisterhood. With a cast of beloved characters and loaded with magic, adventure, and plenty of humor, it is sure to thaw even the coldest heart!

Wellesley Theatre Project is an arts academy and a Wellesley nonprofit devoted to providing students (PreK - 12th Grade) with the opportunity to study and experience theatre and performing arts through year round classes, staged productions, workshops and summer camps.

For more information about Disney’s FROZEN, JR or other Wellesley Theatre Project classes and productions, please visit www.wellesleytheatreproject.org or call 781- 235-1550.