Disease, Science and Religion in the Puritan World 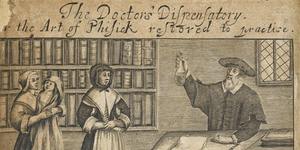 Disease came in many forms in the 17th century. Plague took over 40,000 lives in London alone in 1620. In New England, European-introduced diseases wiped out entire Native American tribes; the deadly smallpox epidemic of 1633 ravaged up to 70% of the native population. It was not just the natives who perished. The Puritans’ first winter in Boston reduced their numbers by half, whether through death or through fleeing back to England.

Whether a malady was psychological or physical, neither the causes nor cures were fully understood. With one foot in Galen's Roman-era theories of medicine and one foot in the new world, 17th-century New England life fostered a strong spirit of invention. Puritans such as John Winthrop, Jr., and later Cotton Mather stood at the forefront of this new era of disease theory.

How did Puritans see the relationship between the religion and medicine? How did alchemy inform the medical practices of John Winthrop, Jr.? How did current beliefs in witchcraft, possession by evil spirits, and mental disturbances affect the burgeoning science of mental health? Did Puritans approach medical science in a way that was substantially different than the other new European settlers in the New World?

Your guide to this fascinating topic will be Dr. Frank Bremer, one of the world’s leading scholars on Puritan New England. You won’t want to miss his unique presentation at one of the most iconic settings in Boston.

Dr. Francis J. Bremer is Professor Emeritus of History at Millersville University and coordinator of New England Beginnings, a partnership of Boston-area historical organizations planning the 400th-anniversary commemorations of the Puritans’ arrival in Boston. He has authored or edited sixteen books and numerous articles exploring 17th-century Puritanism in the Atlantic world and is the editor of the Winthrop Papers for the Massachusetts Historical Society.