Discussion about Graphic Novel 'Aivali: A Story of Greeks and Turks in 1922' 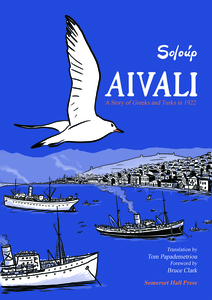 A journey in time … a previous refugee crisis in the Mediterranean … This graphic novel dramatically tells the story of Greeks and Turks living as neighbors in the town of Aivali and other places along the Aegean Sea during the late Ottoman Empire; their subsequent expulsion from their ancestral homelands during a population exchange of Greeks and Turks in 1922, known to Greeks as "The Catastrophe" or the “Asia Minor Disaster”; and their subsequent lives as refugees.

“Following in the footsteps of Art Spiegelman, Marjane Satrapi, Joe Sacco, or Jacques Tardi, Soloup, against the background of blood-stained chapters of History, focuses on human tragedy.” Kathimerini (Greece)

Presented by: The Consulate General of Greece in Boston, The Institute of Eastern Mediterranean Studies, The Advanced Training in Greek Poetry Translation & Performance Workshop, and Somerset Hall Press