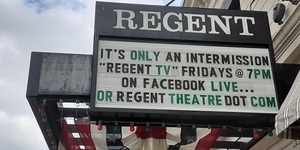 May 20, 2020 [Boston, MA] — Film festival sensation WBCN and The American Revolution is coming back to Greater Boston, and this time, the popular rock documentary will be available for screening in your own home, in support of one of the region’s most beloved and iconic performance spaces, the Regent Theatre in Arlington.

From Friday, May 22 through Thursday, June 4, the film will be available to rent for online streaming by visiting www.RegentTheatre.com.

In a tribute to both WBCN’s longtime local FM dial position and the Regent Theatre’s 104-year (and one month!) anniversary in May, tickets are $10.41. Proceeds will be shared with the Regent Theatre as part of a nationwide campaign by WBCN filmmaker Bill Lichtenstein to support community radio, film and cultural organizations during the COVID-19 pandemic, and to create a public dialogue on how media can create social change. All film rentals will include an invitation to join a free online discussion with Lichtenstein and legendary WBCN staff and announcers on Tuesday, June 2.

"We are excited to be partnering with Bill and his team on our streaming engagement of this landmark film leading up to the virtual audience Q&A,” says Leland Stein, co-owner of the Regent Theatre. “It's a compelling film which I know will resonate with our audience in so many ways, and we also look forward to showing on the Regent's BIG screen once it is safe to reopen our doors. In the meantime, it's very cool that theatergoers now have the opportunity to watch it at their leisure, online.”

“A year ago, WBCN and The American Revolution launched an exhilarating tour of film festivals and screenings across the United States, many of which benefited community radio stations and theaters. Audiences were uplifted and empowered by the story of how a rock radio station and a passionate community of listeners mobilized to change their world for the better,” says Lichtenstein. “Now, in this unprecedented time, as we are all facing shared danger but must do so apart from one another, the spirit of community is stronger than ever. I’m thrilled that we’re able to share the inspiring message of the film in this way.”

The campaign to support community radio stations and local film and arts organizations ultimately seeks to schedule 100 digital community screenings across the country, in partnership with the National Federation for Community Broadcasters.

A high-energy feature-length documentary, WBCN and The American Revolution follows a compelling cast of characters as their lives connect and intersect during the rise of the legendary radio station that became both a player in and a platform for the explosive rock ‘n roll counterculture, passionate anti-war movement, and burgeoning civil rights, women’s rights, and gay rights movements.

The dramatic and compelling stories in WBCN and The American Revolution are interwoven with the original sights and sounds of the critical events of the late 1960s and early 1970s, thanks to more than 100,000 audio and visual items, many of which were donated to the project by members of the WBCN community and the station’s many listeners and fans. The material includes never before exhibited film shot by Andy Warhol and cinema vérité pioneer Ricky Leacock, images from notable photographers including the late Peter Simon, brother of singer Carly Simon, and Jeff Albertson, as well as aircheck audio from memorable on-air, in-studio moments.

Lichtenstein is himself a WBCN veteran. He began working at the station as a volunteer on the WBCN Listener Line at age 14 in 1970, and later as a newscaster and announcer with his own program. His last film, West 47th Street, won the Special Jury Award for Documentary Film at the 2001 Atlanta Film Festival; Audience Award for Best Long Form Documentary at the 2002 DC Independent Film Festival; and Honorable Mention at the 2002 Woodstock Film Festival. It aired on PBS’s P.O.V. and was called “must see” by Newsweek and “remarkable” by the Washington Post.

A portion of all proceeds from this non-profit production will benefit a scholarship in the name of Fred Taylor at the Berklee College of Music and a scholarship for documentary film students in the name of Danny Schechter at the Columbia University Graduate School of Journalism.

For more information about WBCN and The American Revolution, contact: